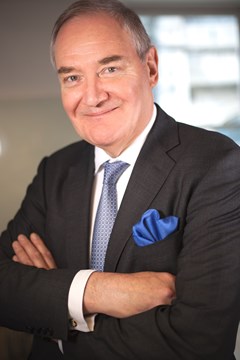 President for 2017/2018In accordance with Clause 11 of our Constitution:

“A President and Deputy President shall be elected annually by the Vice Presidents and Council from among their number to take office at the close of the Annual General Meeting in the year of election.”

Roger moved in to a new role as director of workplace distribution and industry affairs on 01 June, having for the past seven years been Managing Director of the group employee benefits division of Lighthouse Group Plc, the largest autonomous national IFA in the UK, with 430 advisers, and Aim listed since 2000. He is responsible for the distribution of benefits, services and workplace marketing of the Group and for the oversight of related group pensions and group risk business, as well as the development of new products and services. Lighthouse Group is the UK leader in affinity marketing and intermediation and provides advice on demand to over 7M members of the 9 major trades unions and 11 other affinity groups, with 10,000+ face-to-face appointments each year.

Prior to joining Lighthouse in 2010, Roger was deputy chair and director of employee benefits at Helm Godfrey Ltd from 2005. This followed 22 years from 1983 in building up his own practice of insurance broking and employee benefits consultancy in the West End. During this time, he was also the executive director in London of Rasmala Investments Ltd 2000-03, the first UK regulated business to develop and market sharia compliant products and services; consequently serving on the Bank of England’s working party on Islamic finance.

Prior to starting his own practice, Roger worked for 15 years for the Sun Alliance and London Insurance Group, which included a spell with Jardine Mathieson in Hong Kong. His “composite” career has given him a unique exposure to the world of general insurance, as well as to financial services, investments and occupational pensions.

Currently, Roger is a member of the Financial Capability Board of the Money Advice Service, appointed in 2015 to represent the interests of the financial services and general insurance sectors.

Roger has been a member of the Institute since 1969 and chaired the Young Members’ Committee in 1978-79. He joined the Institute’s financial services committee in 2006 and chaired it from 2010-16. His year as Institute President runs from 25 September 2017, having served as the deputy president and chair of the finance committee for the previous 12 months.

He has held a variety of industry and non-executive positions, most recently as a non-exec director of the Financial Ombudsman Service for 8 years until 2013. Prior to that, he chaired the FSA’s smaller businesses panel 1999-2004 and was a non-executive director of the Personal Investment Authority 1996-2000. He was a founding member and a director of the Association of Independent Financial Advisers in 1999 and its deputy chair until 2005. Roger chaired the EU life and pensions committee of the European Federation of Insurance and Investment Intermediaries (BIPAR) in Brussels 2004-06, whilst also serving as the UK's retail market representative on the practitioner working group of the Committee of European Securities Regulators (CESR) in Paris 2004-09, which primarily entailed overseeing the development and implementation of the MiFID level 2 and level 3 directives.

Roger, awarded an OBE in 2002 for services to financial services regulation and small businesses, was the recipient of the Scottish Widow's financial services industry Lifetime Achievement award in 2009. More recently, in September 2017, he received the first ever J P Morgan Gleneagles Conference award for Industry Engagement.

The son of a dairy farmer and brought up in North Devon, Roger lives in Westminster and is a Freeman of the City of London and a liveryman and Master of the Worshipful Company of Broderers for 2017-18. Interests include politics and music; both he and his wife, Hermione, who is a leading cosmetic scientist with her own company, are mad about modern opera and have been patrons of the English National Opera for 20 years. Roger is also a Trustee of the ENO Benevolent Fund, a Governor of Roedean School (having recently stepped down as chair of its finance committee), and the Chief Honorary Steward of Westminster Abbey.