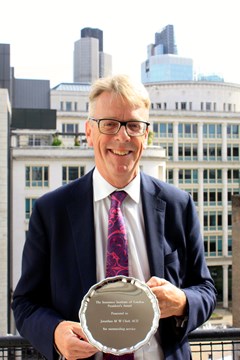 A graduate in biochemistry and biochemical engineering from Oxford and London Universities, Jonathan first joined the CII in 1981 and qualified as an Associate in 1987 and achieved ACILA in the same year.

Between 2003 and 2007 Jonathan was the Honorary Treasurer of the CII – a challenging role in a period of great change at the CII yet undertaken with diligence despite difficult circumstances. In 2004 Jonathan became the Chairman of the CII’s Faculty of Claims. A Chartered Insurance Practitioner since 1995, Jonathan was elected as a Vice President of the London Institute in 2004 and awarded a CII Exceptional Service Award in 2008 and the CII President’s Award in the same year.

A Freeman of the City of London and member of the Worshipful Company of Insurers, Jonathan is a Past President of the London Business Interruption Association. He has just been elected President of the Chartered Institute of Loss Adjusters.

After six years as the Honorary Treasurer of the Insurance Institute of London, having served the maximum period allowed, Jonathan was stepping down. Despite the enormous demands of his professional role which include much international travel, Jonathan can truly be described as tireless. His enthusiasm shines through such that his passion for professional development is infectious.

Very active in the sailing community, especially with the Royal Thames Yacht Club, Jonathan is a former member of the British sailing team and has held many senior positions within the sport.

Jonathan sets an exemplary standard. As the President of the Insurance Institute of London Dominic Christian was delighted to recognise Jonathan for his contribution to the London Institute, to the CII, to loss adjusting and the wider community.